Massmart News
How Massmart grew Builders to market-leading behemoth
A big bet in 2003 has paid off, and then some.

In just over a decade, Massmart entered an entirely new category – home improvement and building supplies – and grew this business to a R12 billion market leader. Its grown revenue in this unit by more than 11% in all but one of its financial years since 2005 (it dropped 1% in 2009, impacted by the global financial crisis).

As at the end of June 2016, it had a footprint of 102 stores, mostly in South Africa but with an increasing contribution from operations in Botswana, Mozambique and Zambia. This portfolio spans four formats: Warehouse (‘big-box’), Express (convenience), Superstore (focused on the lower-end of the market) and Trade Depot (targeted primarily at contractors and tradesmen), spanning just under 450,000m2. 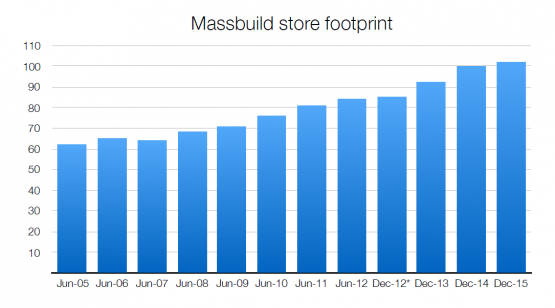 It all began in 2003 with the acquisition of eight Builders Warehouse stores operating in Johannesburg and Pretoria. It accelerated its entry into this market in 2005 with three acquisitions: 34 Federated Timbers stores (mostly national footprint), 14 Servistar stores (operating the Eastern Cape and KwaZulu-Natal) and three De La Rey ones (all based in the Western Cape). The Federated Timbers stores became Trade Depots, Servistar turned into the core of the Express business and the De La Rey stores served to allow Massmart to enter the Western Cape market with its Builders Warehouse brand. At this point, it had a home improvement business doing R3.5 billion in sales.

In March 2005, the then chief executive, Mark Lamberti, described the home improvement market in South Africa as “very fragmented” with “very few chains”. Crucially, there was no national chain, along the likes of the US’s Home Depot or the UK’s B&Q aimed at the middle to upper income consumer. This market, conservatively estimated at “R18 billion to R20 billion” at that time, was a significant opportunity for the group.

Later that year, he described the strategy as one of “aggressive growth for market leadership”. It has more than delivered.

By 2014, it described itself as a clear market leader in South Africa with “few direct format competitors”. Its plan was to continue to “aggressively roll-out Warehouse and Express stores”. Store growth has moderated somewhat with rates of high single digits in 2013 and 2014 dropping to just 2% last year. Earlier this year, at the publication of its FY2015 results, it forecast an additional 13 stores by the end of 2017 (three new Builders Warehouse stores, three Express outlets and seven Builders Superstores, to take the total to 115). Last month, however, it provided a revised forecast of 14 stores by June 2018 (with the composition changing to two Warehouse, three Express and nine Superstore outlets).

It cautioned in August that there would be “more openings of [the] successful Builders Express format due to currently limited real estate availability for [the] larger Builders Warehouse” stores.

It’s built a more than tidy business in three SADC countries (Botswana, Mozambique and Zambia). In December, it said: “Rest of Africa store sales are fast approaching R1 billion out of 6 stores after just 3 years”. Last year it said Builders Warehouse was performing “very well in Botswana and Mozambique” and pointed to so-called “second-wave city expansion” in these countries resulting in “excellent sales and margin growth”. The Zambian entry is recent, with a Builders Warehouse store opening on November 26 last year. At the half-year results in August 2016, it announced that annualised sales north of the Limpopo had exceeded R1 billion. This puts operations outside of South Africa at close to the 8% of revenue mark, already.

The primary opportunity is in South Africa, however. “Hardware, paint and glass” is a R66 billion category for the 12 months to end June, as per Statistics South Africa retail trade sales data. With close to R12 billion of that (if you exclude the R1 billion in ex-SA sales), Massbuild has close to 20% market share.

Its major competitors aren’t that far off… Spar’s Build It business reported retail turnover (in other words transactions through the tills) of R10.4 billion in its last financial year (to end-September 2015). About a tenth of its 336 stores are in Botswana, Lesotho, Namibia, Mozambique and Swaziland.

Cashbuild reported revenue of R8.669 billion in the year to June across its 284 stores (including 10 DIY format and 42 P&L Hardware stores, a recent acquisition). Outside of South Africa, it operates in Botswana, Lesotho, Swaziland, Namibia and Malawi.

Steinbuild – which primarily operates under the Buco, Pennypinchers, Hardware Warehouse and Timbercity brands – is 38% of Steinhoff’s Africa Household Goods business. This unit reported full-year revenue of €804 million in the year to end-June, which translates to approximately R13 billion. This means Steinbuild is a roughly R5 billion business. The acquisition of Iliad Africa (effectively Buco) in January has helped it achieve decent scale.

Massmart maintains that even though it has “the highest relative market share domestically” this is “still low” and there is scope for growth and expansion.

These competitors are, increasingly, tackling Builders head on. Buco, which Iliad Africa established from a mishmash of its general building materials brands (D&A, Campbell, Builders Market) effectively targets the DIY segment of the market, somewhere between Builders Warehouse and Builders Express.

Spar’s BuildIt has launched new format TRENDIY stores. These are aimed squarely at the “urban do-it-yourself market”. The footprint is limited, with just four stores (Salt Rock (North Coast), Willowbridge (CT), Bedford Square, Bryanston (Jhb)), but the group sees this as a growth driver in the medium-term.

Cashbuild, which has traditionally operated at the lower-end and in rural or peri-urban areas, has also entered the DIY market with smaller format Cashbuild DIY stores. It currently operates 10 of these.

Massbuild isn’t lying down. At the higher end, its rolled out a “Home Living category” in the Rivonia Builders Warehouse in November last year and this will be introduced into its other big-box stores. And, at the lower end, it’s being increasingly aggressive with its Superstore format. This was launched in 2013 and is “focused on lower-income customers”. In the last 18 months, it opened its first Superstore outside of Gauteng. Massmart points to sales growth in excess of 25% for this division and says profitability is improving fast.

Across the group, trading margins are the best – at 4.4% for H1 2016 – versus 4.3% for Masswarehouse (Makro), which is twice the size. Massdiscounters (Game/Dion Wired) and Masscash’s margins are sub-1%. Builders is helped, to some extent, by the high penetration of private label goods. Last year, it said private label comprised 18% of total sales, more than double the group level of 9.5%.

However, it’s still falling short of its previously stated long-term operating margin target of 8%. In the mid-2000s, it repeatedly cited an international benchmark of 10% (Home Depot/B&Q). Sales density trends are very positive, however. It’s managed to improve these from under R20,000 per square metre to R27,000 in the last five years. That’s a massive improvement. You can see the group is increasingly focused on improving profitability and efficiency, which is no real surprise as sales and store growth in its South African business are moderate (completely expected given its market position). It continues to actively manage its store portfolio (unprofitable stores are being closed), which is a positive sign and, given that it’s at scale, it isn’t going to add space just for the sake of adding space.